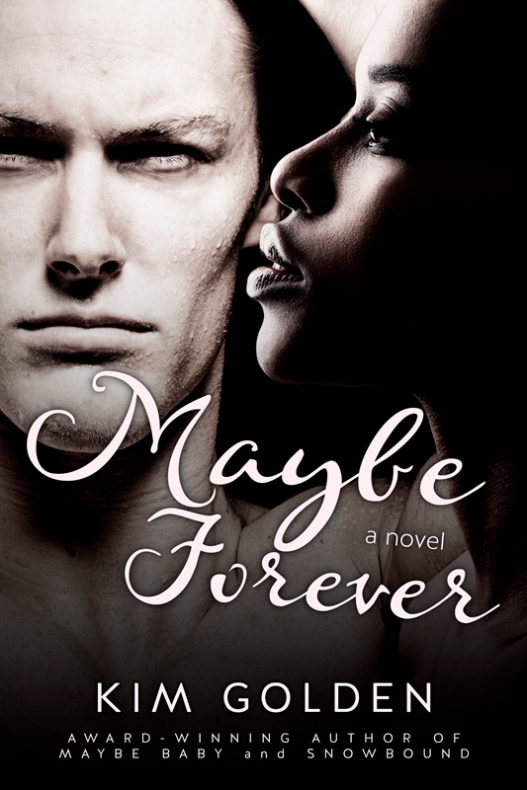 The anticipated sequel to MAYBE BABY and MAYBE TONIGHT

Is the honeymoon over…?
Now married with two children, Laney and Mads are finding their life together isn’t as simple as it used to be. While Laney struggles with motherhood, Mads is so focused on chasing success that he loses sight of promises he’s made.

Better apart…?
When frustration gets the better of her, Laney takes the kids and goes to the US, hoping to find solace with her aunt Cecily, a former school teacher who now teaches yoga and meditation in Florida.

Will Laney and Mads find a way back to one another…or is it too late?

Launching on May 15 for Kindle, Nook, iBooks and Kobo.

Add MAYBE FOREVER to your TBR List on Goodreads

Cover designed by Arijana Karcic of Cover It! Designs.

I know this is that time of year when I’m supposed to post about how I reached all of my publishing/writing goals and tell you how great I am and make you think I am super-organized/ambitious/fill-in-the-blank. But…I’m not going to do that.

Why? Because it’s boring. Instead, I thought my buddy Ryan and I would simply wish you a happy new year and let you know that we’ve got some great things planned for 2015.

Initially, I had this really witty post planned, but I’ve been ill with the weirdest cold/flu/whatever-this-is since 17 December and my brain is still not quite unfuzzed from all the cold medicine I’ve had to take to facilitate sleeping and not coughing myself to death. So that essentially means this will be a meandering post. 😉

But anyway, 2015…I’m looking forward to finishing some projects I started in 2014–namely Maybe Tomorrow and my NaNo2014 novel, Maybe Forever. You may remember that Maybe Tomorrow follows Eddy’s path to new love and Maybe Forever picks up Laney and Mads’s story, four years and two kids later. I spent most of Christmas revising Maybe Forever. There are still some scenes that need to be added, but soon it will be ready to be sent to beta readers.

Maybe Tomorrow ‘s draft should be ready to send to beta readers and an editor by mid-January. I’ve already got a cover for it, designed by the insanely talented Arijana K. at Cover It! Designs. I don’t remember if I’ve shared it with you already…hmm. Soon then. I think you’ll love it as much as I do. Arijana’s working on the cover for Maybe Forever as well. 🙂

Someone asked me if there would be more Laney and Mads stories once I finish Maybe Forever. I don’t know. I haven’t really thought about it. There will be a short story about Jesper, Niklas’s son (remember him? He showed up at Laney and Mads’s apartment in Maybe Tonight). I’ve also got some ideas for stories in the Snowbound universe. I’ve got a few other ideas up my sleeve. 😉

So tomorrow is New Year’s Eve and then a few days after that it’s my birthday. One of the first thing’s I’ll do to start off the new year is send my donations to Girls Write Now, Stockholms Stadsmission and Covenant House. This year has been sluggish compared to last year, but I think we’ll still be able to make good-sized donations to all three charities.

Well, that’s it for today’s post. I am in the mood to write fiction, so off I go! Happy New Year, everyone! And thanks for your support! 😀

Thanks so much to everyone who participated in last’s week’s cover survey. The majority of you (52%) preferred Cover 1. A little over thirty percent preferred Cover 2 and the rest didn’t like either cover and wanted another hottie. I think I will go in the direction of Cover 1 but look for another image. 🙂

Now, my Facebook author page hit the 900 fan mark last night and to celebrate it I posted a teaser from Maybe Baby. I decided to share the teaser here as well! Hope you like it! 🙂 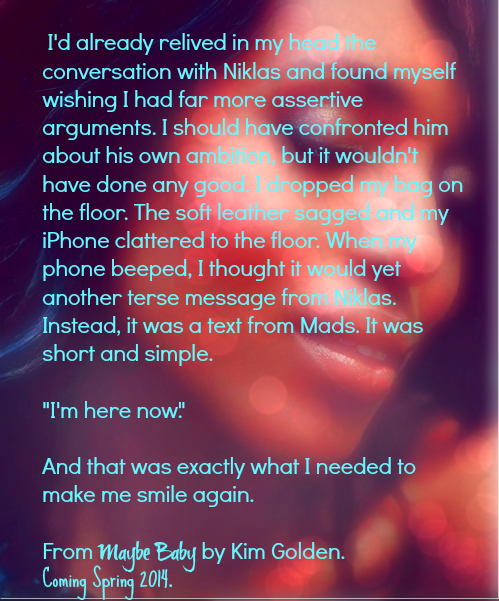 I’ll keep you posted on the actual release date for Maybe Baby. I initially planned a February release but it might take another month or two, depending on how busy things get at the office.

Hope you all have a great weekend!

While I’ve been working on Maybe Baby, I’ve also been working on three novellas (though one may turn into a full-fledged novel) in the Maybe Baby “universe”. One of the novellas revolves around Mads, the Danish sperm donor, who turns Laney’s head. Think of it as a prequel: the story takes place just before Mads meets Laney and he’s dealing with some personal issues that have left him wondering what is the meaning of it all.

The novellas will be ebook-only releases. I haven’t decided yet if they’ll be Kindle exclusive. I’m leaning towards making them available for all ereaders, even though my Nook sales are miniscule. Anyway, what I wonder now is which cover do you prefer for the Mads story?  These are the first two mock-ups. I’ll probably have a few more by Sunday.

Can’t wait to see what you think! 🙂

For the last year, I’ve been hard at work at finishing Maybe Baby, which I’ve blathered on about on Facebook and on Kim Talks Books. Maybe Baby was my NaNoWriMo 2012 novel, and it was so much fun to write, even if it deals with infidelity, a subject that is not everyone’s cup of tea.

To keep me motivated while I was writing, I made an inspiration board on Pinterest and then I used Picmonkey to make a collage. I had these open as I was writing so I could stay focused. Those of you who’ve been following Maybe Baby‘s progress know that I envisioned Kerry Washington as Laney and Nikolaj Coster-Waldau as Mads. I initially had another Danish actor (Rudi Køhnke) in mind when I was creating Mads, but I realised very quickly that he didn’t really work for me. That’s when I thought about Coster-Waldau, and realized he was more appealing as the sexy furniture maker who steals Laney’s heart.

I knew I wanted to write a novel that was set outside the US. Since I live in Sweden, I figured I may as well write what I know in terms of setting. I ended up deciding to set the novel in both Stockholm and Copenhagen, to give a sense of how Laney’s life changes once she meets Mads.

Anyway, once I realised I’d revised as much as I could on my own, I began looking for help and it came in the form of Black Firefly. Jade and the team at Black Firefly helped me with beta reading, editing and proofreading. Then Arijana from Cover It Designs helped me with an amazing cover design that I love. So now Jade is formatting, while I work on an idea for another book.

My tentative plan now is to release Maybe Baby in late January-early February. I know that there will be people who will not approve of the storyline or will think Laney is a difficult character, but I love her just the same.

Before I forget, I want to thank the Black Firefly team and Arijana for all their help. You are all amazing and have been such a great support in this process. I also want to thank Sussi Lindebjerg Malek for her help with the Danish words and phrases. You are an angel, Sussi! And I would also like to thank my writing buddy, Kim Kane for listening to so many “what if” scenarios and character sketches, and letting me read aloud the naughty bits so I could make sure they sounded okay. 🙂 And of course I must thank my Matera Brainstormers who have been so encouraging and enthusiastic about Maybe Baby from the very beginning.

In a few weeks, I’ll set up a Goodreads page for Maybe Baby. I’ll keep you posted on the exact publication date. In the meantime, I’ll continue plotting my next novel set in Hunters Grove, the fictional town in Vermont that is the setting for Snowbound. It’s another romantic tale, though the couple in focus won’t be Mia and Jake. This time, it will be Asha and Nick. And the story will start somewhere around Halloween and end on New Year’s Eve. So, yes, another holiday story. 🙂

That’s it for today! Tomorrow is another day at work and then the office Christmas party.